A new era of growth has begun for AEGEAN, with the official reveal of its new livery and branding as well as the presentation of the first three new generation Airbus A320neo, equipped with latest technology Pratt & Whitney engines. Sealing a 20 years course of successful operation in Greece, AEGEAN sets a solid ground for the future.

During the official reveal ceremony with the attendance of the Greek Prime Minister Kyriakos Mitsotakis, stakeholders and employees, Eftychios Vassilakis, Chairman of AEGEAN, and Dimitris Gerogiannis, CEO, stressed that AEGEAN’s long-lasting investment in Greece is a token of its faith in the country’s potential and prospects for development.

Having already expanded the initial order with 12 additional aircraft, AEGEAN is expected to receive by 2025 a total of a minimum 46 aircraft, A320neo and A321neo, with an option for 12 additional aircraft (up to 58 aircraft). This is the largest private investment in Greece, valued at $2,5-3bn at market prices ($6-6,5bn at list prices). For the next 6 years, AEGEAN will invest more than $500mn per year for the expansion and modernization of its fleet. Until July 2020, AEGEAN will receive a total of 6 new aircraft reaching a fleet of 65 aircraft, adding 1.5 million seats (19 million seats in total for the year) and supporting the expansion of its network in 155 destinations and 44 countries in 2020.

Every new, additional aircraft will have a significant contribution in Greece’s economy, employment and tourism industry. Estimated at 100,000 new incoming tourists, €80 million direct tourism revenue, 70 new additional direct jobs in AEGEAN and ground operations, will have a positive impact  for the country.

During the event AEGEAN presented its new livery and brand identity. Inspired by the Greek sky and seas, historical architecture and the design heritage of our country, the new brand identity, livery and cabin are here to shape a dynamic future for AEGEAN and enhance passenger experience.

During his speech, Greek Prime Minister, Kyriakos Mitsotakis, pointed the value of the investment for Greece, stating: “The Greek government actively supports companies that focus on cutting-edge technology, respect their employees and adopt sustainable growth practices. It is then when their own growth becomes value for the society. AEGEAN combines vision with reason and while flying, remains grounded. This is an attribute that the country needs, especially from Greek companies”.

AEGEAN CEO, Dimitris Gerogiannis, highlighted the significance of the investment, reiterating the company’s commitment for ongoing growth. “2020, signifies a new beginning, with a new dynamic, new potential and new identity for AEGEAN. The next 24 months will be extremely creative for us, since we will design our renewed product offering. For all of us, the new aircraft represents primarily a platform that enables our people to work consistently towards creating a better travelling experience for our passengers”, he mentioned.

, during his speech emphasized on the significant and ongoing contribution of air transport in the development of the tourism sector as well as the total footprint for Greece. Moreover, he stressed: “In the wake of our 3rd decade we are committed to continue investing and working towards gaining our passengers trust, operating responsibly, protecting the environment as well as offering growth opportunities for our employees. We will continue joining forces with partners to achieve common goals. With a new brand identity, that embodies the true spirit of Greece and our values of hospitality and credibility we aspire that our new fleet will continue our legacy and become a symbol of a new dynamic period for Greece as well”.

The new aircraft will start their flights within February, with the first aircraft operating the flight Athens-Munich on Friday, February 14th 2020.

The impact in economy, employment and environment per 1 additional new aircraft:

The new aircraft at a glance

Engine: The new A320neo aircraft of AEGEAN, will be powered up by the advanced Pratt & Whitney GTF™ engines which are expected to contribute to a substantial reduction of CO2 and NOx emissions levels per flight and passenger flown, while also significantly lowering the noise footprint.

Flight range: In addition, the reduced fuel consumption will serve to enhance AEGEAN’s competitiveness, as well as to offer range extension and enable the company to fly to new destinations.

Cabin: Aircraft will have a new seating configuration. The new seats combine ergonomics, reduced weight, extra comfort and modern aesthetics. They will also have reusable or fully recycled service kits. 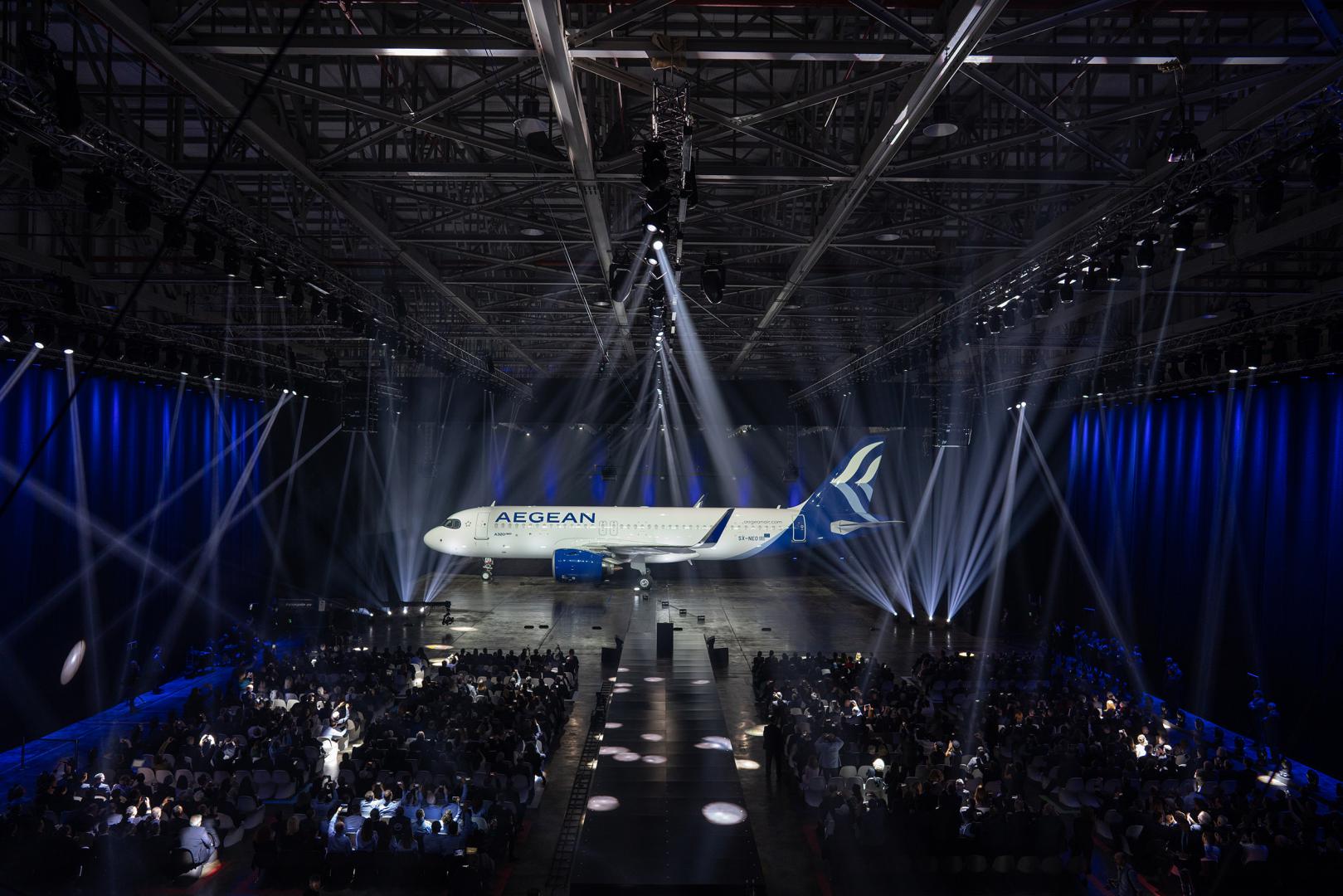 ΑEGEAN and its subsidiary Olympic Air carried 15 million passengers in 2019. The 2020 itinerary covers a network of 155 destinations, 31 domestic and 124 international in 44 countries. By the end of the year, flights will be carried out with 65 planes, including the first 6 Airbus A320/321neo aircraft expected in the first half, making the fleet one of the youngest in Europe. AEGEAN is a member of STAR ALLIANCE, the largest global airline alliance. The Company has been honored, for the ninth consecutive year and tenth time in the last 11 years, with the Skytrax World Airline award, as the best European regional airline in 2019.

European Tourism Manifesto alliance: European Commission guidelines are paving the way to recovery for the European tourism sector from the COVID-19 crisis