German bookings for package holidays on the Turkish Riviera slumped by more than 40% in February while Crete was up more than 50%, according to new figures showing holiday sales to major destination airports.

Antalya, the major airport serving the Turkish Riviera, had a 42% fall in package holiday bookings in February compared to 12 months earlier as holidaymakers switched to alternative destinations or delayed their bookings. This left it with a 19% share of all bookings for the ten largest destination airports on the German market, much lower than its usual market share at this time of the year. The airport had already seen heavy falls in the previous three months: January (-40%), December (-26%) and November (-24%).

Similarly, bookings for Hurghada, the largest holiday airport in Egypt, were down by 29% last month after a 57% collapse in January, 29% in December and 42% in November, as customers continued to avoid the Red Sea coast following the Russian charter plane crash last November.

The biggest winner last month was Heraklion, the main airport on Crete, with a 56% surge in bookings compared to February 2015. It had already seen a 25% rise in January. In a further sign of rising demand for Greece, bookings for Rhodes were up by 37% after double-digit rises in the two previous months.

The Bulgarian Black Sea coast is also proving popular for Germans as an alternative destination at present, as reflected by a 35% rise in bookings to Varna.

The surge in bookings for Spain was shown in the figures for Palma and the Canaries. There was a 23% rise in package bookings to Palma last month, leaving the Majorcan airport with a dominant 32% share of top ten airports. This was three percentage points higher than in January.

The Canary Islands also did well with high double-digit growth rates for the three largest airports for the second month in a row. Fuerteventura grew by 24% in February after a 27% rise in January. Las Palmas followed a 28% rise in January with a 24% increase last month, while Tenerife South grew by 14% after 18% in January. However, Arrecife only showed a 3% rise last month.

Traveltainment’s Bistro system is used by some 11,000 travel agencies in Germany to make package holiday bookings from 130 tour operators, while its Internet Booking Engine is used by more than 350 online travel agents and portals. 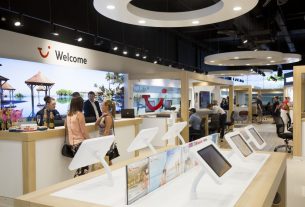 Re-Open EU: The new tool for tracking restrictions across Europe