As schools break up for the summer, the annual Post Office Travel Money Family Holiday Report (www.postoffice.co.uk/familyholidays) reveals that over half of families are planning a trip abroad and 35 per cent of these will jet off on a European beach holiday, despite Covid-19 travel regulations in the UK and abroad.

For those planning trips, sterling’s rise in value against European currencies means Britons who choose carefully will see their holiday cash stretch further. However, while prices collected for the Post Office Beach Barometer have fallen in over half of the destinations surveyed, there are big differences in the cost of 12 tourist items across the Eurozone. Prices in the Algarve are £126 lower than in Nice, making the south of France 132 per cent more expensive. And consumer research conducted for the report suggests that the growing trend towards overspending on meals, drinks and beach extras could wipe out the benefit of the strong pound.

Post Office Travel Money found that well over two-in-five (44 per cent) of the families planning to travel abroad this year will budget more to allow for rising resort costs and Covid-19 tests2. 82 per cent of them expect to pay for tests at an average cost of £349 for a family of four. Over a quarter (26 per cent) said that savings made during lockdown have made it possible to set a bigger budget.

However, the report found that three-quarters (73 per cent) of parents who set a budget on their last family holiday bust it by an average of 39 per cent, spending £262 extra on the budget of £674 they set3. The biggest drain on the family purse is likely to be family meals, which range from around £28.62 in Sunny Beach, Bulgaria to £125.37 in Nice, France. ‘Pester power’ is another pitfall as spending on beach items rose 21 per cent to an average of £185 on the last family trip4.

Despite this, families could shave hundreds of pounds off resort spending, depending where they choose to holiday – and especially across the Eurozone. The Family Holiday Report’s Beach Barometer5 comparison of costs in 14 destinations found that prices in Portugal are 16 per cent cheaper than Spain and 24 per cent lower than in Greece, the three countries rated best value by holidaymakers surveyed for the Post Office Holiday Money Report in May 2021.

Portugal cheaper than Spain and Greece

Portugal’s Algarve (£95.51) was cheapest in the Eurozone and third-placed overall for a basket of 12 items, including a family meal, drinks, suncream, insect repellent and beach items ranging from buckets and spades, lilos and ice creams to mask and snorkel sets and pedalo rides. Prices fell 1.5 per cent on 2019 levels. Another Portuguese destination, Madeira, new to the barometer for 2021, was fourth in the survey at £110.08. 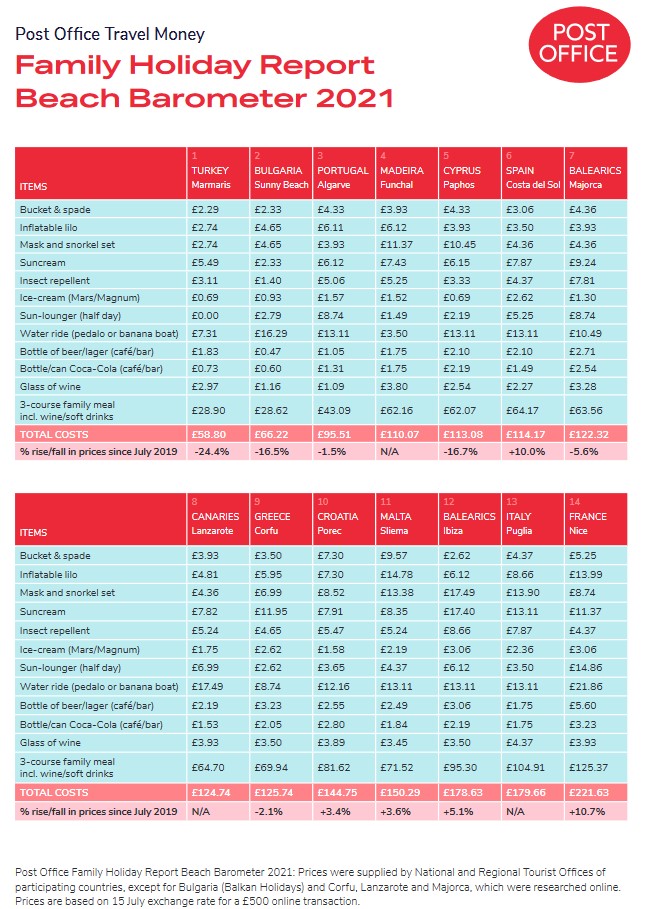 By contrast, prices have risen by 10.7 per cent in Nice, most expensive in the barometer at £221.63, and by 10 per cent in the Costa del Sol to £114.17. Although the Spanish favourite has fallen to sixth in the barometer, it is cheapest of four Spanish destinations surveyed. Prices in Majorca are over seven per cent more expensive, while Lanzarote (£124.73) and Ibiza (£178.62) are pricier still.

However, the lowest prices are not in Eurozone destinations but in Turkey and Bulgaria, which are the best bets for bargain-hunters, a third the cost of most Eurozone resorts.

Turkey is currently on the government’s red travel ban list but a continuing slump in the value of the Turkish lira against sterling has made this one of Post Office Travel Money’s strongest bestsellers in recent months, indicating that Britons are keen to travel to the country, when this becomes possible. The lira’s weakness made Turkey easily the cheapest of 14 destinations surveyed for the Beach Barometer. At £58.80, its top resort, Marmaris, registered a 24.4 per cent price fall over 2019 when the last price comparison ran.

Prices in runner-up resort Sunny Beach, Bulgaria were also down significantly but the 16.5 per cent fall to £66.22 was due to a combination of the stronger pound and lower resort costs. Prices for meals and drinks were the lowest across Europe but the high cost of a water ride in Sunny Beach – £16.29 compared with £7.31 in Marmaris – helped the Turkish resort to clinch the top spot. However, although Bulgaria’s new green list status would have made it a popular choice, holidaymakers will have to wait for the Bulgarian government to lift its ban on UK visitors.

Croatia is another green list choice. At £144.75 and 10th in the barometer table, prices in Porec may be 3.4 per cent higher than in summer 2019 but Croatia has been rising in popularity over the past decade and its green watchlist status is like to stimulate demand.

Nick Boden, Head of Post Office Travel Money, which accounts for one-in-four UK foreign exchange transactions, said: “After such a long wait, it is understandable that families want to head to European beach resorts for some summer sun. However, the big variations we found between costs in European resorts means it will pay dividends to do some homework before leaving home to get a realistic view of the holiday cash needed in the resorts they are considering.”

Although the Post Office consumer research showed that spending on meals and drinks by families had fallen on their last trip abroad, over nine-in-10 families splashed out on drinks and meals in resorts at an average cost of £142.41 for restaurant food and £84.69 on drinks, while 93 per cent spent £88.23 on food and drinks bought from a shop or supermarket. By contrast, the amount spent on ‘pester power’ items showed a sharp 21 per cent rise. Parents paid an average of £185 for ice creams, visits to water or theme parks, buckets and spades and other beach items, swimming goggles and snorkelling gear, and water activities like pedalo or kayak rides.

Nick Boden said: “Paying for beach items can tip the holiday budget into the red so plan carefully and keep costs down by packing items like suncream, insect repellent and kids’ lilos and swimming masks in the suitcase. Prudent packing could save enough to pay for ice creams and pedalo rides.”

Despite their enthusiasm for overseas travel, more than two-thirds (68 per cent) of families felt they had been ripped off on their last trip abroad, causing them to spend more than they had expected or budgeted. The biggest irritations were on prices for food and drink on planes (35 per cent), the high cost of sightseeing (27 per cent), meal and drinks costs (21 per cent), restaurant service charges (18 per cent) and kids’ beach extras (10 per cent).

Acknowledging that these perceived ‘rip offs’ add to the problem, Nick Boden said: “Overspending on holidays abroad seems to be a growing trend and that makes it doubly important to plan carefully, set a realistic budget and stick to it. Take enough currency to avoid getting stung by poor airport bureau exchange rates or ATM charges abroad. A good way to check spending while abroad is to load cash onto a prepaid card, like the Post Office Travel Money Card, as this will not incur the transaction charges that can add to overspending.”

The Post Office is the UK’s leading foreign currency provider, offering around 60 currencies for pre-order at around 7,000 Post Office branches or online at www.postoffice.co.uk/travel for next day branch or home delivery. 3,600 larger Post Office branches stock the leading currencies and around 7,000 offer euros over the counter without pre-order. These can also be ordered online for same day ‘click and collect’ at selected branches, next day collection at any branch or home delivery. 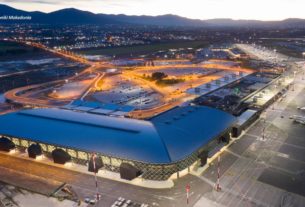