At the Athens International Airport total international arrivals declined in Q1 2017 with 0.6% y-o-y, mainly caused by the performance of the month of February, which recorded a drop of 7% y-o-y, according to GBR Hospitality Newsletter.

Occupancy levels as well as room rates of Athenian hotels showed a positive trend, resulting in an improvement of RevPAR in Q1 2017 of 12.3% y-o-y.
International arrivals at the airport of Thessaloniki increased significantly by 11.8% y-o-y during Q1 2017. February was particularly strong, which was reflected in the occupancy levels of the Thessaloniki hotel sector. Overall, RevPAR increased by 10.1% y-o-y in Q1 2017.
Those resort hotels that were in operation during Q1 started the year well. However, most resort hotels are still closed.
The hotel sector of competitive destination Madrid showed a good performance during the first quarter of 2017, especially in terms of room rates. Overall, RevPAR improved by 9.6% y-o-y in Q1 2017, while Rome improved by 3.4% y-o-y due to improved occupancy levels, but at a slightly lower ADR level compared to same quarter last year. Hotels in Cairo attracted much more tourists during Q1 2017 compared to same quarter last year resulting in improvements in RevPAR. 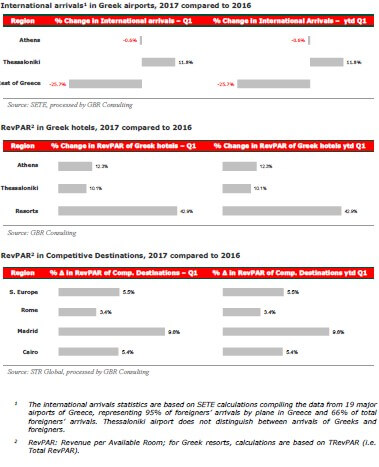 The Greek Tourism Confederation is optimistic for 2017 forecasting at least 26 million international tourists, representing an increase of 5% and significantly higher receipts, targeting at € 14.4 billion, an increase of 12.9% y-o-y. We assume that this increase is based on expected changes in the market mix.
As already reported in our Q3 and Q4 2016 newsletters, the declining travel receipts were partly caused by the increase of tourists from Balkan countries, who are overall low spenders on average. More specifically, 50% of the international tourism growth in the period 2010 – 2015 was sourced from Balkan countries and Turkey.

In 2015 33% of all international arrivals came from Balkan countries (FYROM, Albania, Serbia & Montenegro, Bulgaria, Romania and Slovenia) and from Turkey.
Data of the Bank of Greece for January and February 2017 showed declines in tourism arrivals and receipts, but in 2016 both months were representing just 4.0% of total international arrivals and 2.5% of total travel receipts and are therefore not representative for the course of the tourism sector in 2017.
On an economic level business confidence and employment have both staged notable recoveries, which suggests Greece is past the nadir of its recession. Unemployment too, which peaked at nearly 28% in 2013, has since fallen by 5% points to 23.1%. But despite official forecasts for growth of 2.7% this year, a sustained and robust recovery remains elusive. This year will see another significant fiscal consolidation with tax rises and even though the Greek government reached a political agreement with the institutions at the Eurogroup in Malta at beginning of April, the second review still has not been finalised.
Also the banks continue to struggle under high level of non-performing loans. NPLs in Greek tourism currently amounts to € 3.6 billion, of which € 1 billion is owed to banks by 5 major hotel companies, while € 600 million has already been rescheduled by Greek banks.
In terms of tourism infrastructure, Fraport Greece has finally taken over the management of the 14 regional airports. Fraport will start infrastructure works after the summer, for which it entered a € 357 million deal with construction company Intrakat. Also at the end of April it was announced that a German led consortium will take over operation of Greece’s second-largest port for 34 years under a separate concession agreement.
In the rankings of the Travel and Tourism Competitiveness Report 2017, made public in April, Greece jumped 7 places to the 24th position out of 136 countries in total. However, more work needs to be done to improve its business environment (103rd) with lower impediments to FDIs, lower taxation and enhanced efficiency of the legislative system.

At the beginning of April GBR Consulting presented together with the Thessaloniki Hotel Association the results of the Tourist Satisfaction Survey & Performance of the Hotel Sector 2016.
The research, conducted for the 6th time in a row, showed that the size of the Thessaloniki hotel sector has remained stable over the past 10 years and currently consists of 138 units. However, as demand increased, occupancy levels improved accordingly and reached the same level as cities like Dusseldorf and Cologne in Germany. The room rates did not follow the same trend and compared to European peers ADR levels remained the lowest after Bratislava.
In 2016 the lowest occupancy and room rate levels were recorded during the first quarter. Occupancy peaked in September. In terms of ADR the Thessaloniki hotel sector did not show a particular pattern in 2016. ADR fluctuated between € 64 and € 70.

Tourist satisfaction levels remain very high with an overall satisfaction rate of 8.3 out of 10 of the leisure travellers and 8.1 out of 10 of the business travellers. Entertainment, the inhabitants and the culture of Thessaloniki continue to be the most appreciated aspects of the city.
Finally, it is very interesting that 69% of the foreign leisure travellers visited Thessaloniki only, while 31% also included other destinations in their trip including Central Macedonia. This indicates that there are substantial opportunities for Central Macedonia as a destination with the city of Thessaloniki, Halkidiki, Vergina, Pella, Olympos, Dion and Mount Athos as the main ingredients of the rich tourism product of the region. 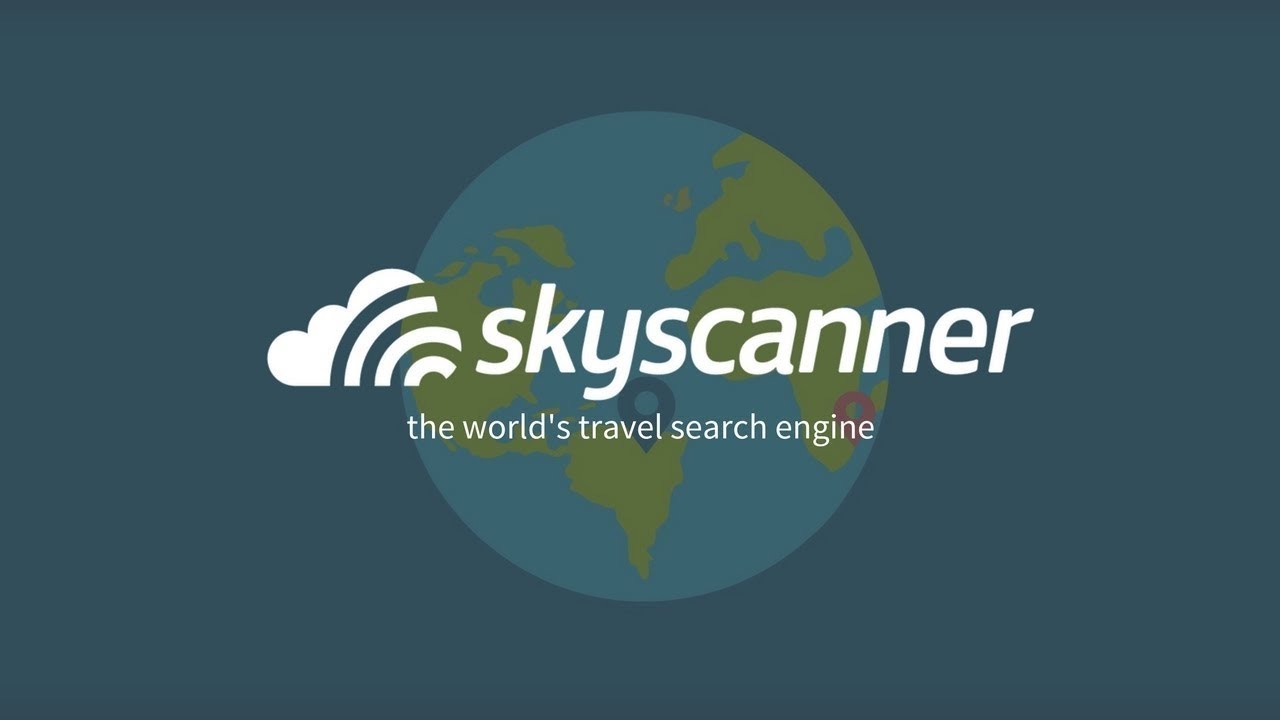 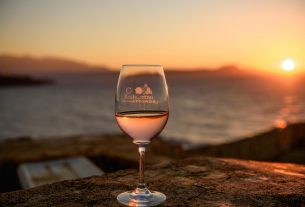