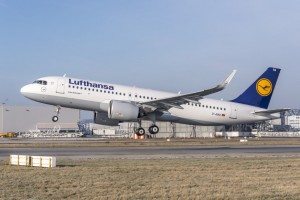 Even before introducing the A350 long-haul aeroplane with an up to 50 percent smaller noise footprint, in future Lufthansa medium-haul planes will also be flying more quietly. This is because the Airbus A320 fleet is being fitted with ‘sharklets’, which are 2.40-metre-tall wingtip extensions. Depending on the length of the route, they bring about fuel savings of up to four percent and correspondingly low CO2 emissions. Thanks to the sharklets, the plane’s climbing performance improves, reducing noise emissions during take-off. “We are in a good position regarding sustainability in Munich. The fact that our fleet is getting quieter and quieter is good news for people who live near the airport in particular”, says Thomas Winkelmann, CEO Lufthansa Hub Munich.

Nature is the model for the sharklets. Large birds, such as the crane or the condor, bend their outer feathers upwards and thus fly in a much more energy-efficient way. The sharklets reduce the lift-dependent resistance and improve the aerodynamics at the wingtips. According to Airbus, the kerosene savings achieved, and thus reduced CO2 emissions, are around 1,000 tonnes per plane per year, which roughly corresponds to the CO2 emissions of 200 cars with average use.

The first Airbus A320 with sharklets has already been delivered to Munich, the second is to follow in the next few days. In total, 12 planes of this type will be stationed in the southern Lufthansa hub by the middle of next year, and there will be 20 planes in Frankfurt. They will all replace older medium-haul planes. Currently, Lufthansa deploys 50 planes of the types A319, A320 and A321 in Munich.