Ryanair,  today 22 June announced the launch of 17 new connections from Athens via Milan Bergamo, providing Ryanair customers with an expanded route choice, and the opportunity to book and transfer directly onto connecting Ryanair flights.

Following the successful launch of connecting flights at Rome Fiumicino last month and from Milan Bergamo this week, from July 3rd, Ryanair customers can:

This connecting service is the newest initiative delivered under Year 4 of Ryanair’s “Always Getting Better” programme, with more connecting services to be rolled out at other airports across the Ryanair network later this year.

“Ryanair is pleased to announce 17 new connections from Athens to destinations in Italy and Spain “via Milan Bergamo” from 3rd July, allowing customers to book connecting Ryanair flights on the lowest fares.

Many of these new routes could have been operated directly from Athens, if Athens airport prices weren’t so high and would have resulted to a significant number of extra tourists and jobs at Athens. Through these 17 connections from Athens to Italy and Spain via Milan Bergamo, customers will be able to transfer onto their next flight without having to go landside, and have their bags checked through to their final destination.

This new service under Year 4 of our “Always Getting Better” programme, will be rolled out at other Ryanair airports throughout our network, (with even more routes to be added in the coming weeks and months). Ryanair.com, the world’s most visited airline website, also sells 20 long haul Air Europa routes to North and South America. We are continuing our discussions with Aer Lingus and Norwegian – and other potential partners – with a view to launching connections with them later this year as we continue to implement the latest round of upgrades to improve the customer experience.

To celebrate the announcement of our new 17 connections from Athens via Milan Bergamo, we’re cutting fares by 20% on all routes to/from Athens, for travel in September, October and November, available for booking until midnight Friday, 23rd June.” 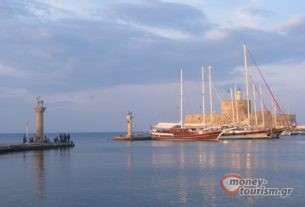