Skip to content
Αρχική > BUSINESS > Celestyal Cruises : Steady Growth, An International Orientation and A Continuous Upgrade of the Passenger Experience

Celestyal Cruises held its Summer 2016 season press conference at Piree in Piraeus on the 22nd of June 2016, the company announced it will make 821 approaches to Greek ports in 2016 despite the challenges, the objective tensions and the obstacles the wider region is facing.
Celestyal Cruises expects the volume of passengers this season will be quite near last year’s, with arrivals to date of almost 122,000 for approximately 488,000 overnight stays by foreign passengers for the year. 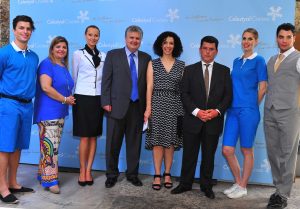 “We are cautiously optimistic on our progress for this year, but also for next one’s, foreseeing the positive attitude and preference for our country as a destination,” said Mr. Pythagoras Nagos, Celestyal Cruises Vice President of Sales. “Greece is consistently a favourite destination for foreign tourists, since the country consistently offers them amazing hospitality, history, gastronomy and culture”. Celestyal Cruises has endeavoured to stoke this global interest in Greece and the Eastern with attendance at more than 60 national tourism fairs worldwide, where the company has promoted the authentic Greek experience its cruises provide. Mr. Nagos also mentioned the new Greek destinations in which Celestyal Cruises has invested for 2016, Nafplion and Chania. In 2017 the Celestyal Nefeli will sail to another new Greek destination, Kalymnos. 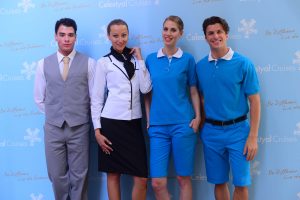 Regarding the company’s plans for Cuba, Celestyal Cruises announced it will continue to focus on Cuba and, after three successful seasons cruising to the island, beginning in 2017 the Celestyal Crystal will remain in Cuba year-round: the increase in demand has been impressive, with 12,500 passengers in 2016, an increase of 57%, with estimates for next year approaching 39,000 passengers, and the Crystal will sail year-round to meet this demand. Celestyal Cruises is the only company visiting four Cuban ports in total, and from this year onward the Crystal will also call at Punta Frances. The company also announced its new “Live the Authentic Gulf Experience” Cruises, 3-, 4- and 7-day cruises in the Persian Gulf beginning November 2017 through the middle of May 2018, with ports of call including Bahrain, Doha, Dubai, Fujairah, Muscat.

The company’s other key announcement was its continuous upgrade of its cruise ships, which includes the complete transformation of its newest ship, the Nefeli, and the continued renovation of the Celestyal Olympia, with both projects expected to contribute a total of €26M to Greek shipyards. The company has also engaged Greek designers MI-RO, Dimitris Mastrokalos and Giannis Raptis, to design new crew uniforms, as part of its ongoing efforts to upgrade the experience at sea. “We aim to support Greek designers,” said Mr. George Koumpenas, Vice President of Operations, “and for that reason we cooperated with MI-RO on the design of more than 50 uniforms for a series of various roles on the ship”.

Celestyal Cruises Marketing Manager Salomi Pnevmatikou discussed the company’s promotional efforts and its current strategy of providing consistently tempting all-inclusive cruise offers to the Greek market: accommodation, meals, all drinks, authentic Greek entertainment at sea and all the comforts of a floating hotel. Ms. Pnevmatikou emphasized a few of her department’s key messages, reminding attendees that cruising is one of the most enjoyable and affordable holidays, especially for groups of friends and for families, since children up to 16 years old pay only harbour dues. Ms. Pnevmatikou also discussed this year’s thematic cruises, which have been designed to satisfy every taste, and the “Stories of Greek Summer Festival” thematic cruise from June to August, which targets Greeks with on-board performances by well-known artists and radio personalities.

Thanks to steady steps and a creative strategy, Celestyal Cruises – and the Greek cruise industry as a whole – continues toward the positive completion of this year’s tourist season, even while facing challenging circumstances in the region. The company is convinced both its growth and the growth of the overall industry will continue in 2017. 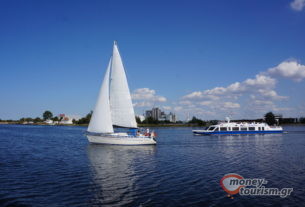 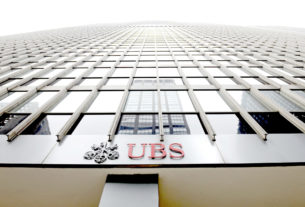 UBS: Market optimism boosted by vaccine progress and impact of US election results