Skip to content
Αρχική > REPORTS > ForwardKeys: Spain in prime position for a successful Easter and Summer

Spain is among the most sought-after destinations in the world by tourists for this Easter, as highlighted in the presentation of travel forecasts to Spain made last Friday, 1 April 2022 by the Ministry of Industry, Commerce and Tourism and ForwardKeys, the leading global travel intelligence and data company.

“The year 2022 has started with a sustained recovery in tourism, as shown by the data from the hotel occupancy survey with 24.1 million overnight stays between January and February, 72% of the pre-pandemic level, or the employment data recorded in February. An increase of more than 300,000 affiliates compared to its level in 2021. A positive evolution despite the uncertainty generated by the omicron variant that occurred – Spain is perceived in our main markets as a safe destination due to the high vaccination rate of the population”, said the Minister of Industry, Commerce and Tourism, Reyes Maroto.

The Secretary of State of Tourism, Fernando Valdés, has also referred to the consequences of Putin’s war and the Response Plan approved by the Government that is going to mobilize 16,000 million euros in public aid, a plan that aims to reduce energy costs, help the most affected companies and groups and generate confidence in the Spanish economy. Although all sectors are affected by the uncertainty of the war, including the tourism sector, according to ForwardKeys forecasts in April we can recover between 80% of the international tourists that we had in 2019. However, we must be cautious since the evolution in the next few months will depend on the duration of the war and how it may affect confidence in travel“.

Maroto has also highlighted that the Ministry continues with the deployment of the Tourist Modernization and Competitiveness Plan financed with the Next Generation funds and has announced the extraordinary call for 2022 of the Tourism Sustainability Plans in destinations endowed with 720 million euros is now open. The objective of the program is to advance in the transformation of tourist destinations towards a model based on environmental, socioeconomic and territorial sustainability.

Looking at the latest air ticketing data by ForwardKeys for Easter travel, the overall big picture is positive. International arrivals to Spain are down by 13% versus pre-pandemic levels while domestic travel is just down by 1%. 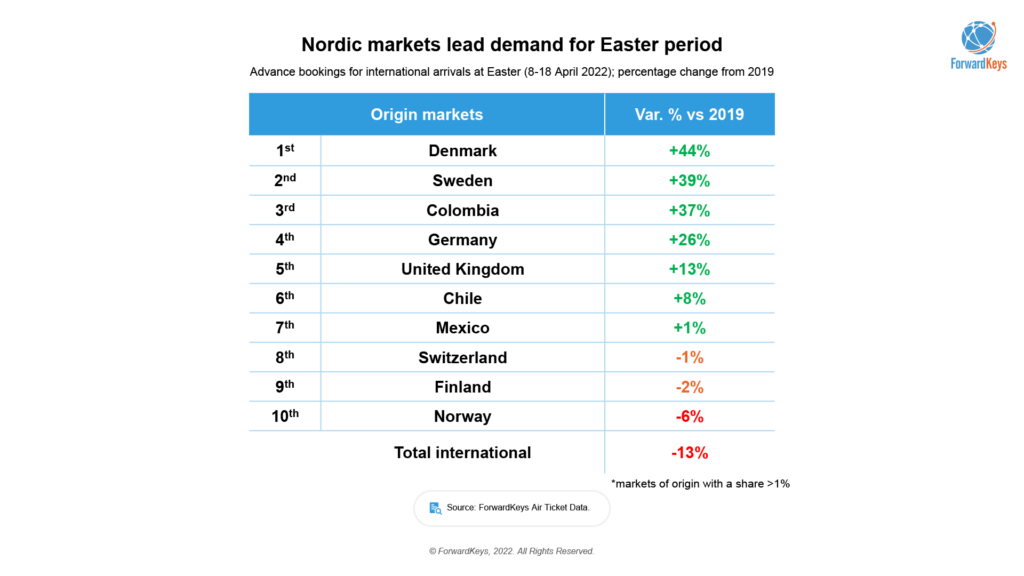 Unsurprisingly among the top five destinations for Easter holiday travels in Spain, four out of five destinations are in the Canary Islands: Lanzarote, Fuerteventura, Tenerife, Gran Canarias, and Ibiza. This was the main trend for domestic tourism observed by ForwardKeys in 2021 as well.

More good news for Spain is the return of German and British tourists due to the ease of travel restrictions. The top destinations travelling to Spain this Easter are Denmark, Sweden and Colombia followed by Germany and the UK. 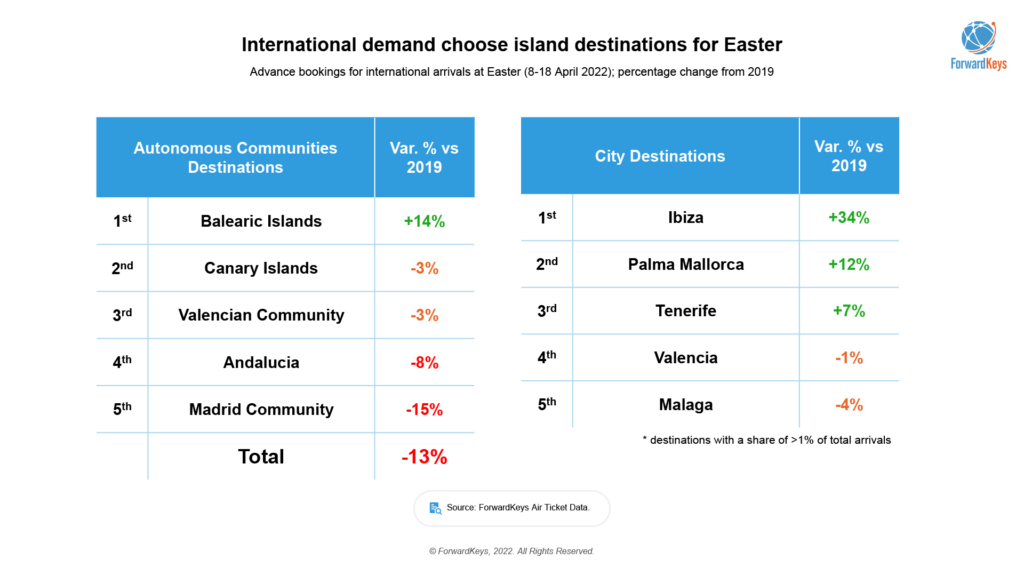 “Throughout the pandemic, we have seen a lot of frustrated demand, which has turned into renewed interest from travellers each time restrictions allowed travel again; In this new phase of the pandemic, Spain is rapidly recovering to the point where it is close to the volumes prior to the start of the crisis. This Easter we expect traditional source markets such as the UK or Germany to exceed pre-pandemic arrival levels,” says Juan Gomez, Head of Market Intelligence at ForwardKeys.

“But don’t expect things to be the same as pre-pandemic. Our data is showing that the length of stay is up to an average of 9 days in Spain with the largest growth seen in groups of 3 – 5 people, normally this size reflects families. This is interesting as it means hotels, tour operators and airlines ought to think out of the box on how to better engage and interest travelling families,” adds Gomez.

Airlines have scheduled only 7% fewer seats for international flights to Spain for Easter than at the same time in 2019. Some destinations such as Fuerteventura (+17%), Ibiza (+16%), Tenerife (+11%) and Palma (+3%) will have more seats than in pre-pandemic times.

Future travel outlook for Spain in Q2 and the Summer

Spain is demonstrating resilience and remains one of the most preferred travel destinations in Q2 and over the summer. When examining the future bookings for Q2 compared to 2019, Spain is down by 22%, but still ahead of neighbouring France and Portugal.

“This is really encouraging as a trend we’ve noticed is that people are more likely to book last-minute so this figure can only improve,” says Juan Gomez.

“Furthermore, the demand is real, as the seat capacity scheduled for this period is down by 5% compared to 2019 levels with some destinations such as Tenerife and Palma de Mallorca anticipating demand by increasing their respective capacity by +14% and +4%,” adds Gomez.

Summer will be the pivotal season to reflect if Spain’s tourism sector has fully reactivated. “To end on a high note, our air ticketing data shows that for international tickets booked for June – August, we can see an increase of 197% compared to the same period last year,” says Gomez. 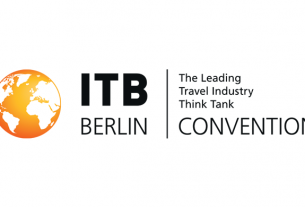 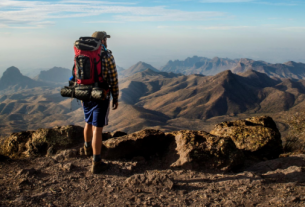