IATA released an updated global passenger forecast showing that the recovery in traffic has been slower than had been expected.

In the base case scenario:

June 2020 passenger traffic foreshadowed the slower-than-expected recovery. Traffic, measures in RPK, fell 86.5% compared to the year-ago period. That is only slightly improved from a 91.0% contraction in May. This was driven by rising demand in domestic markets, particularly China. The June load factor set an all-time low for the month at 57.6%.

The more pessimistic recovery outlook is based on a number of recent trends:

Owing to these factors, IATA’s revised baseline forecast is for global enplanements to fall 55% in 2020 compared to 2019 (the April forecast was for a 46% decline). Passenger numbers are expected to rise 62% in 2021 off the depressed 2020 base, but still will be down almost 30% compared to 2019. A full recovery to 2019 levels is not expected until 2023, one year later than previously forecast.

Meanwhile, since domestic markets are opening ahead of international markets, and because passengers appear to prefer short haul travel in the current environment, RPKs will recover more slowly, with passenger traffic expected to return to 2019 levels in 2024, one year later than previously forecast. Scientific advances in fighting COVID-19 including development of a successful vaccine, could allow a faster recovery. However, at present there appears to be more downside risk than upside to the baseline forecast. 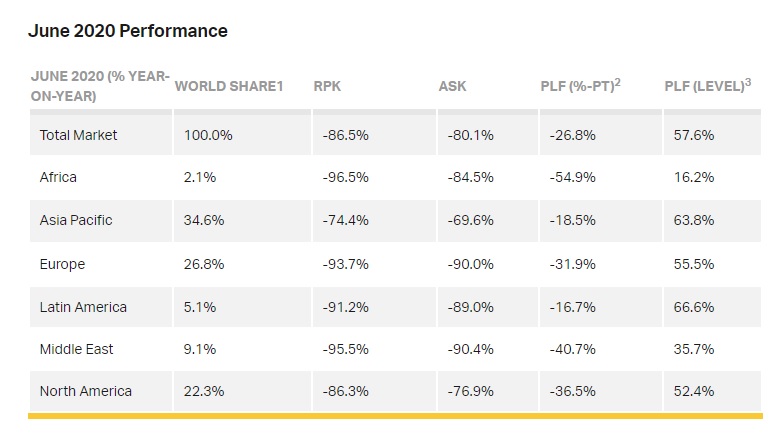 Asia-Pacific airlines’ June traffic plummeted 97.1% compared to the year-ago period, little improved from the 98.1% decline in May. Capacity fell 93.4% and load factor shrank 45.8 percentage points to 35.6%.

Latin American airlines suffered a 96.6% demand drop in June compared to the same month last year, from a 98.1% drop in May. Capacity fell 95.7% and load factor sagged 17.7 percentage points to 66.2%, which was the highest among the regions.

African airlines’ traffic sank 98.1% in June, little changed from a 98.6% demand drop in May. Capacity contracted 84.5%, and load factor dived 62.1 percentage points to just 8.9% of seats filled, lowest among regions. 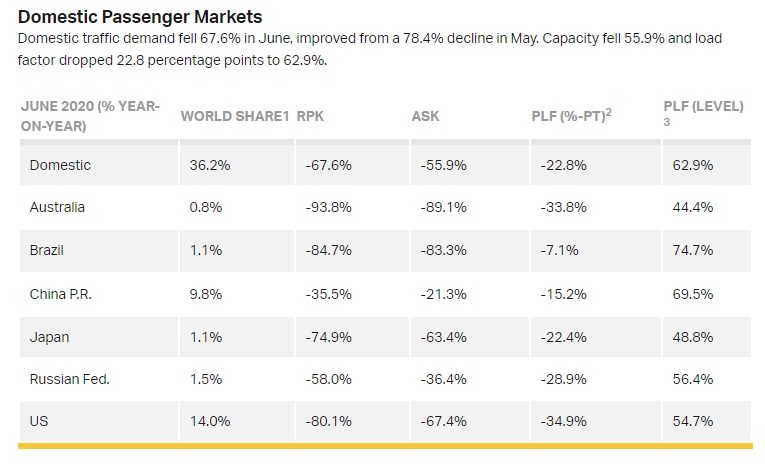 China’s carriers continued to lead the recovery, with traffic down 35.5% in June compared to the year-ago period, raised from a 46.3% decline in May.

Japan’s airlines saw improved domestic demand after the state of COVID-19 emergency was lifted in late May. Domestic RPKs fell by 74.9% year-on-year in June, compared with around 90% annual declines in the previous two months. 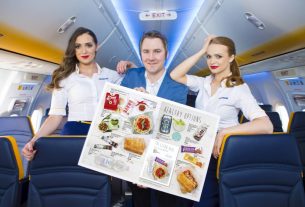 Ryanair To End Rostering Cancellations By Slowing Growth This Winter 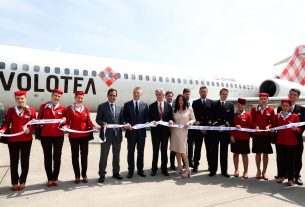 VOLOTEA launches a new base in Athens