High net worth individuals and business owners globally are slightly more optimistic on the economy and stocks but are concerned about the trade war and holding more money in cash, according to UBS Global Wealth Management’s quarterly Investor Sentiment survey.

The survey, which polled more than 4,600 wealthy investors and entrepreneurs in 18 countries, saw confidence tick up at the end of the third quarter. Fifty-three percent expressed optimism on the global economy and 61% on their own region’s economy. Both figures were up two percentage points quarter over quarter. Fifty-six percent were bullish on their own region’s stocks, up one percentage point.

However, 73% of respondents said market volatility from the trade war concerned them. As a result, 34% said they were shifting more money to cash – making this the most popular reaction to trade developments among respondents. Cash holdings rose one percentage point to 27% of respondents’ portfolios this quarter – much higher than the percentage typically recommended by UBS Global Wealth Management’s Chief Investment Office (GWM CIO).

This tempered optimism was also in evidence among business owners. Thirty-four percent said they were planning to hire new workers, down five percentage points. Forty-four percent said a global recession was highly likely in the next six months. By contrast, GWM CIO sees a global recession as unlikely in the next two quarters, with strength in key areas like US consumption offsetting weakness in manufacturing.

If anything, however, respondents globally were even more concerned about political dynamics in their home country, at 47% of respondents versus 44% who expressed concern over a global trade war. The concern was especially prevalent in the US, with 60% worried about domestic politics versus 44% over trade.

Paula Polito, Client Strategy Officer at UBS Global Wealth Management, says: “Geopolitical concerns such as the global trade war are keeping investor optimism in check. There is a dichotomy in sentiment – investors are holding large cash balances in a wait-and-see mode, even though nearly 50% anticipate higher stock market returns in the next six months.”

US investors’ optimism on their economy remained unchanged quarter over quarter. However, the proportion that expressed optimism on US stocks dipped from 53% to 50%. Business owners were particularly cautious, with 31% planning to hire compared with 46% in the second quarter. Nevertheless, despite declining intentions to put money to work, cash holdings scaled back from 22%  to 21% of portfolios.

Latin American investors experienced the biggest reduction in optimism on their own economy, from 69% of respondents in the second quarter to 61% in the third, driven largely by political developments in Argentina and elsewhere. Optimism expressed on their own stock market also decreased from 72% to 62% of respondents, while the proportion of business owners intending to hire went down from 38% to 31%. Nevertheless, cash holdings changed less radically, with an increase of just one percentage point from 29% to 30%. Tax increases were the biggest worry in the region, at 68% of respondents.

European investors’ economic optimism remained roughly stable quarter on quarter. As in the case of US investors, the proportion that expressed optimism on their own stock market dipped from 53% to 50%. Among business owners, domestic economic optimism was markedly better, at 67% versus 53% in the prior quarter. Like their US peers, European investors also saw domestic politics as their top concern, at 43% of investors versus 39% for long-term national competitiveness and tax increases. In the UK, the biggest concerns were domestic politics, at 51%, and Brexit, at 49%. In Germany, it was the low yield environment, at 46%. In Italy, it was the national debt, at 47%.

Swiss investors witnessed one of the biggest jumps in economic sentiment, with 55% expressing optimism in the third quarter versus 49% in the second. Sixty percent were also bullish on domestic stocks, up 16 percentage points. That confidence translated directly into portfolios, with cash holdings down from 30% to 25%. A relatively low proportion, or 31%, of business owners also saw a global recession as highly likely over the next six months. Overall, investors’ top concern was cyber security, at 33% of respondents.

Asian investors experienced a rebound in economic sentiment in the third quarter, with 68% expressing optimism on their region’s economy versus 60% in the second. Bullishness on domestic stocks also strengthened from 56% to 61% of respondents. Nevertheless, cash holdings rose two percentage points to 34%, the highest number in any region. Among business owners, 32% planned to hire, compared with 38% three months prior, while 50% expected a global recession to follow in the next six months. Trade tensions helped explain some of this caution, with the trade war remaining the top concern for Asian investors at 45% of respondents.

STR: flat occupancy with increases in ADR and RevPAR for Athens 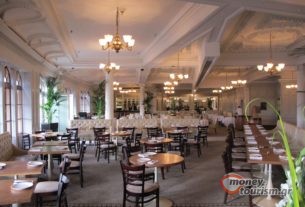